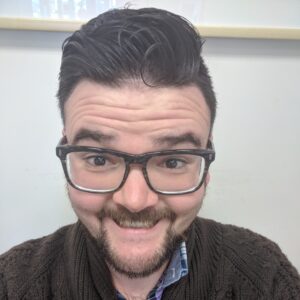 Tim has spent most of his career in Finance/Banking, including the last eight years as a Customer Experience Lead with Scotiabank. In addition to his operational/managerial duties, he is heavily involved with planning and executing events for several Scotiabank Employee Resource Groups that focus on Professional Development, Diversity/Equity/Inclusion, PRIDE, and Indigenous.

Originally from Prince Edward Island, Tim moved to Western Canada in 2014, spending time in Lethbridge, Fernie, B.C., and moved to Calgary in 2019, where he has been able to grow within his current career capacities at Scotiabank while taking on important and valuable ERG roles. These roles have exposed him to the inner workings of professional development and the importance of a company’s allyship journey.

Tim has four post-secondary education programs from institutions across Canada, including a Diploma in Public Relations and a Master of Arts in Professional Communication from the University of Victoria and Royal Roads University, respectively. Tim joined Calgary CPRS as a student member in February 2020 and joined the board in June 2022. The most valuable piece he has found since joining Calgary CPRS is the networking and friendships he has made with other members.

Outside of career endeavors and his board position, Tim likes spending time with his family (near and far), swimming laps regularly, spending time with friends, getting away to the mountains, and traveling home to PEI each summer.